Achieve smooth, sweeping motion shots without a dolly or track with the WIRAL Lite Cable Camera Motion System. The transport system consists of a camera transport unit, a Quickreel rope system, a remote control, a removable battery with charger, two end-stop clips, and a ball mount with a 1/4"-20 mounting thread. The Quickreel system comes with 164' of UHMWPE lightweight yellow cable that allows the camera unit to clip on and slide along the length of the cable. The system comes with two end-stop safety clips that ensure the camera unit doesn't slide off the rope. The unit supports up to 3 lb cameras, and can incline up to 30° when attaching a camera weighing up to 7 oz.

The Wiral Lite has two control options: wireless remote and wireless smartphone app. The included wireless remote provides controls for adjusting speed, start/stop, modes such as time-lapse, electronic end-stop settings, and battery life indication. The Wiral LITE app provides the same remote features as the remote control to control speed, start/stop, and time-lapse, and additional features such as ping-pong back and forth motion and automatic follow mode to follow your subject without the need to actively control the unit. It features a quick and easy touch interface to control all the settings, motion, and features on both Android and iOS. The app also provides tutorial videos to guide you through different Wiral Lite techniques.

The removable battery that powers the camera unit provides approximately three hours of battery life. Two batteries and a battery charger are included. The unit comes with a built-in 1/4"-20 thread as well as a ball mount head with a 1/4"-20 thread to mount your camera. 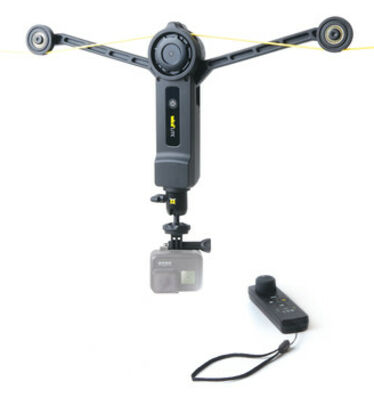