This 28mm T2.2 1.8x Anamorphic Lens from Vazen is a true anamorphic lens, not an adapter. It provides a 2.39:1 widescreen look with blue flares and oval bokeh for micro four thirds-mount cameras like the Panasonic GH5, the Z CAM E2, and the Blackmagic Design Micro Cinema Camera, and for E-mount cameras with an adapter. The wide 28mm prime provides a 1.8x anamorphic squeeze. The 28mm lens features a 2.7" minimum focus distance, focus marks in feet, an 80mm front diameter, and a relatively compact form.

The Vazen 28mm gives you a 28mm view vertically and a 15.5mm view horizontally for a 1.8x magnification that works with 4:3 proportioned sensors, provided by cameras with anamorphic mode, or a manually cropped 16:9.

The anamorphic image recorded needs to be desqueezed to be properly viewed. Cameras such as the Panasonic GH5 series and the BlackMagic 4K Cinema cameras can do the desqueeze internally, displaying the wide, anamorphic view correctly. For cameras without that capability, most small monitors, such as the SmallHD or Atomos monitors can provide the desqueezing capability. 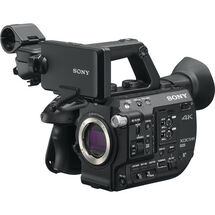